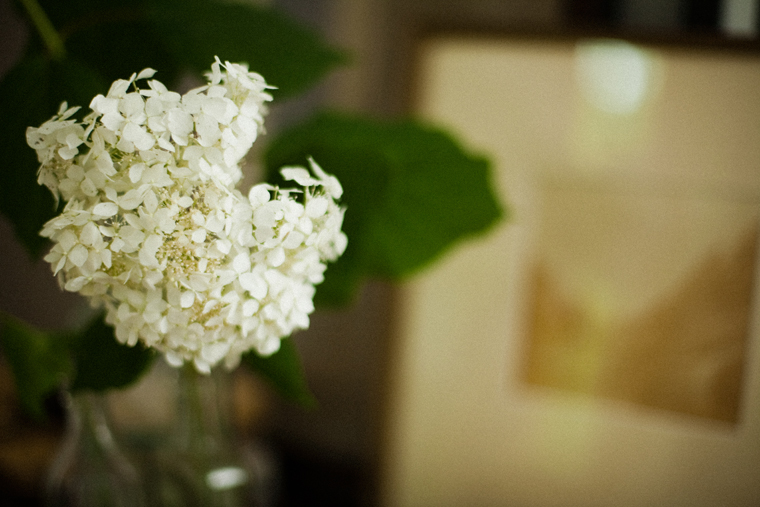 So much has happened since the last time I posted here.
Glad to be back. 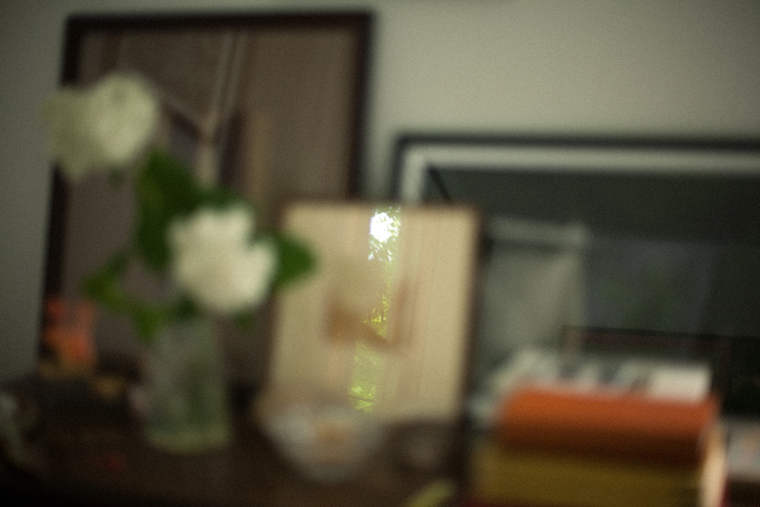 Dear Reader: Thank you for finding this postcard! 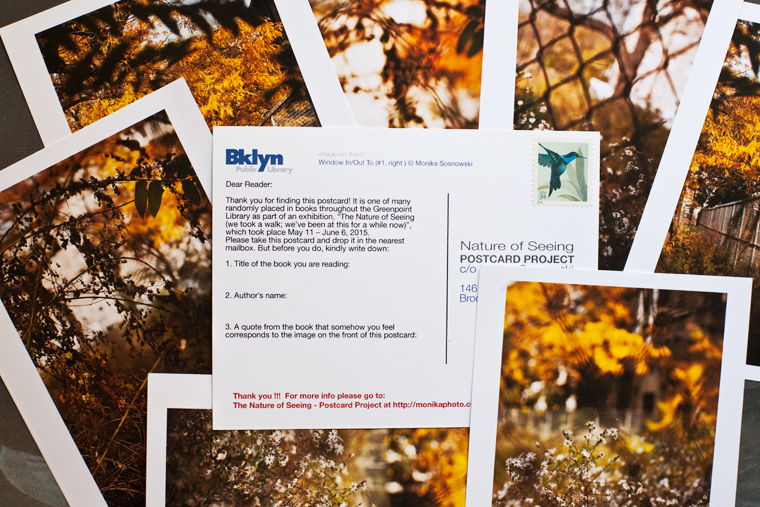 As part of the NATURE OF SEEING (we took a walk; we’ve been at this for a while now) exhibit and artist residency at the Greenpoint Library, at least 50 stamped and addressed postcards with a variety of images from the installation have been placed in its collection. The books to hold the cards have been selected both randomly and specifically by myself and the curator Izabela Barry (her selections are unknown to me).
The cards are to be found by borrowing patrons as a surprise. A text will instruct to drop the postcard in the nearest mailbox, but first to write in the allotted spaces the book’s tiltle, author, and a line or two from the book that to the reader somehow corresponds to the card’s image. One received back by me each card will be photographed front & back to be posted on this blog. The main aim of this project is to get a sense of what people are reading and to see what, if any, is the relationship of image and text.
Borrowing patrons remain anonymous. 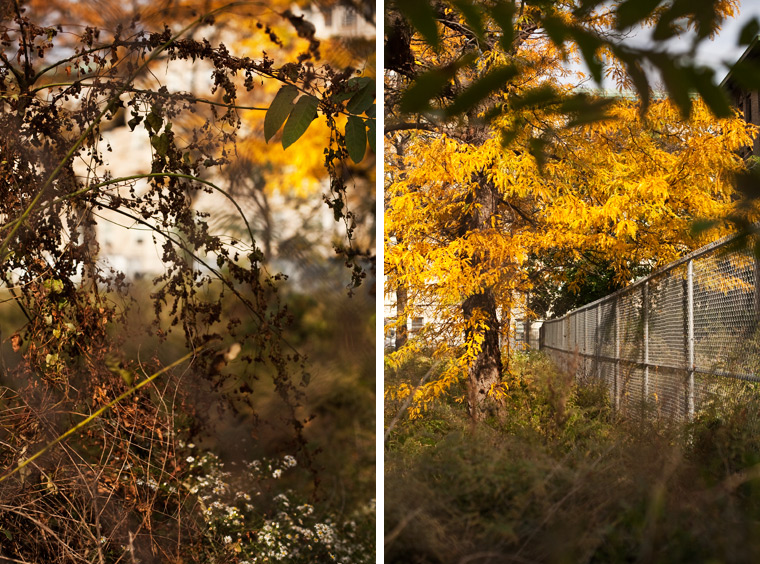 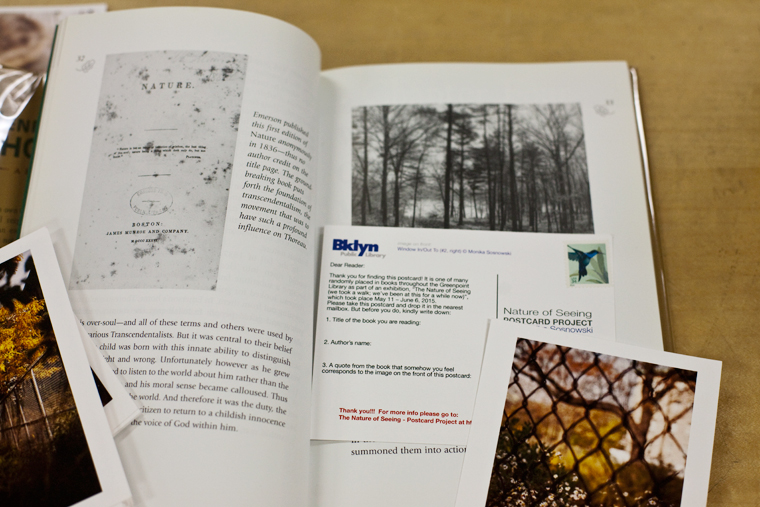 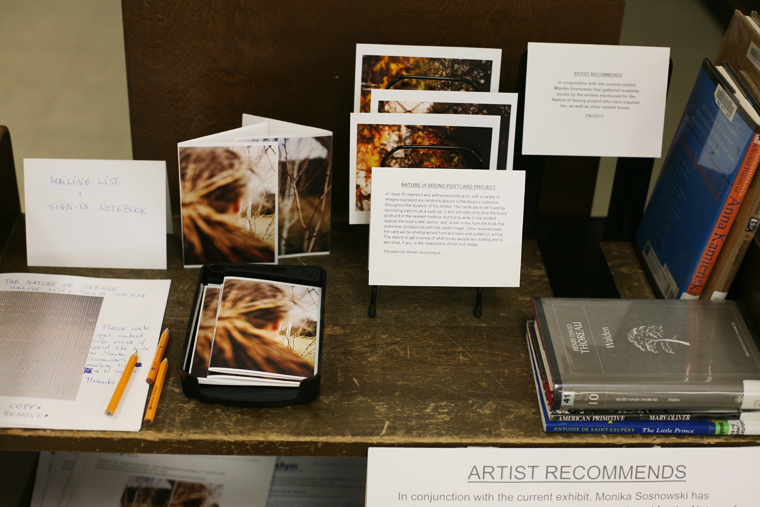 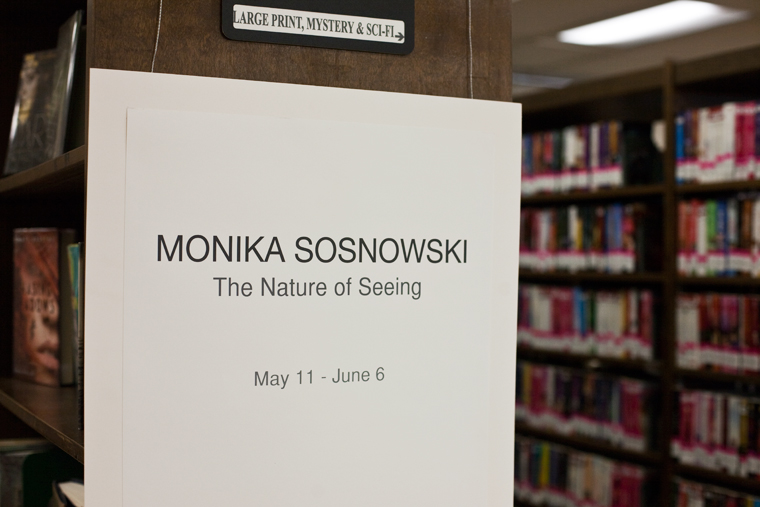 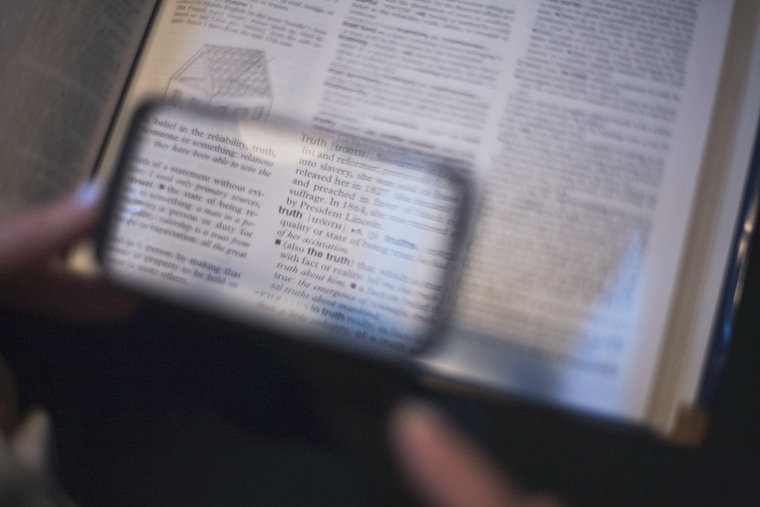 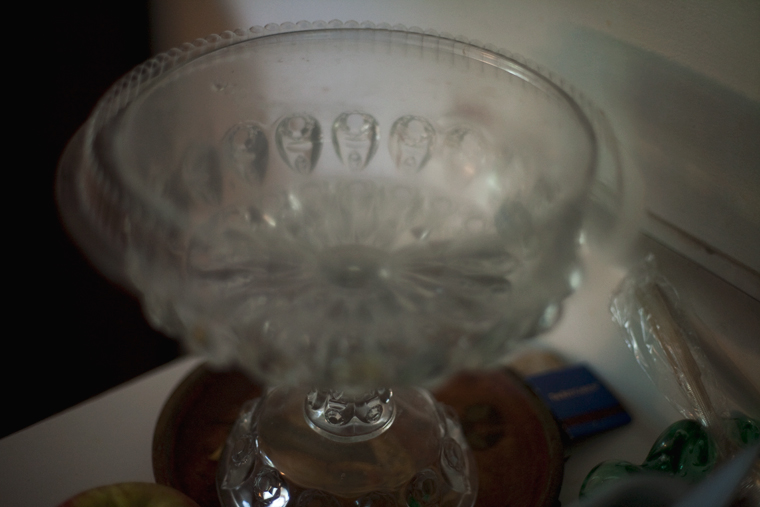 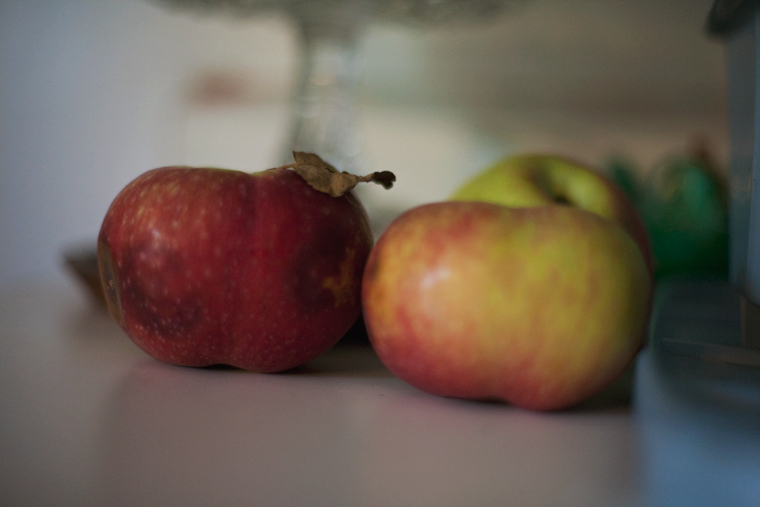 the truth : the real facts about something : the things that are true.

An afternoon in Mary’s kitchen when she still had a kitchen. In our conversations we often pondered the meaning and origin of words. That day it was truth. 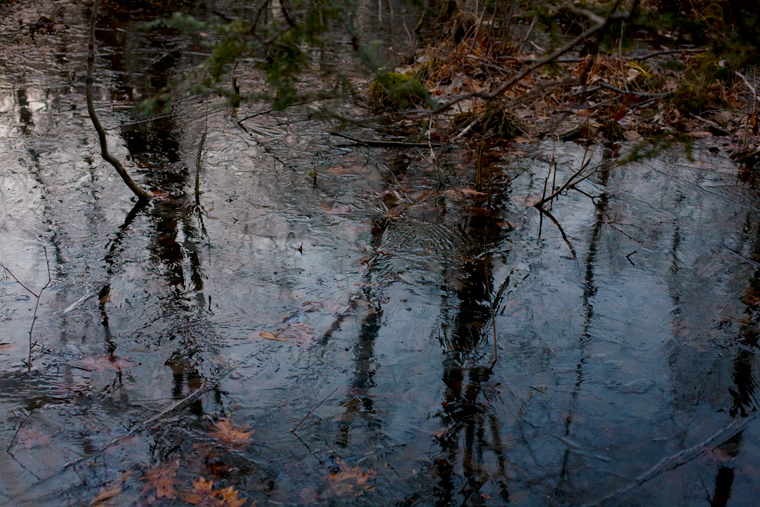 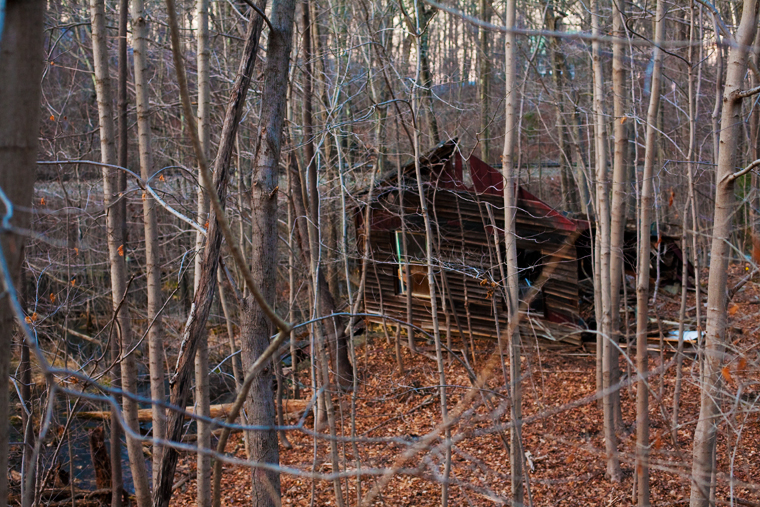 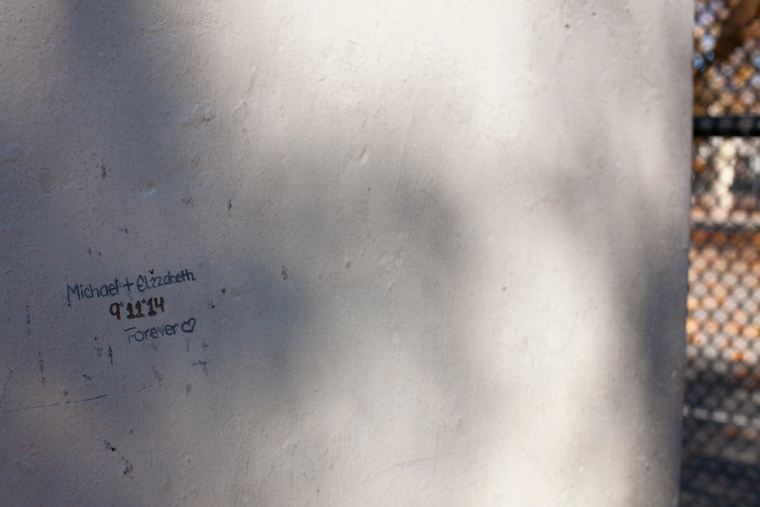 Fragmented narrative continues. In leaps and bounds.  A landscape is a place of reference, departure, arrival.
Work-in-progress.

Alongside I recently discovered the wonderful poetry of Mary Oliver.
Here’s one:

Truly, we live with mysteries too marvelous
to be understood.

How grass can be nourishing in the
mouths of the lambs.
How rivers and stones are forever
in allegiance with gravity
while we ourselves dream of rising.
How two hands touch and the bonds
will never be broken.
How people come, from delight or the
scars of damage,
to the comfort of a poem.

Let me keep my distance, always, from those
who think they have the answers.

Let me keep company always with those who say
“Look!” and laugh in astonishment,
and bow their heads.

Martin Greene - I am moved by your images!

Monika Sosnowski - Thank you Martin for visiting and kind words! 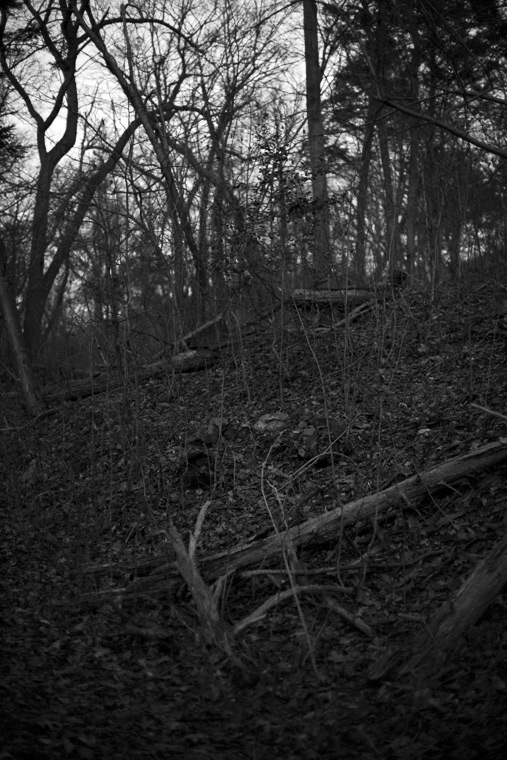 The artist must work towards that which he does not know.
Whether this is called invention or finding or searching, it must be a projection beyond the given state of art.
~ David Smith 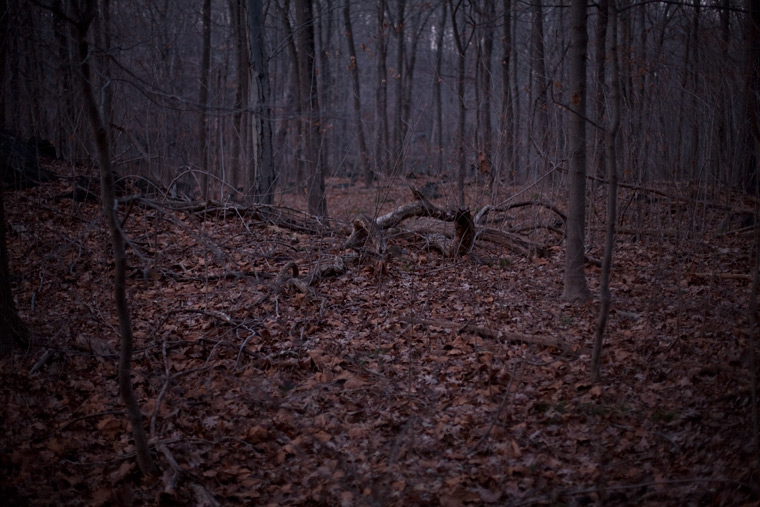 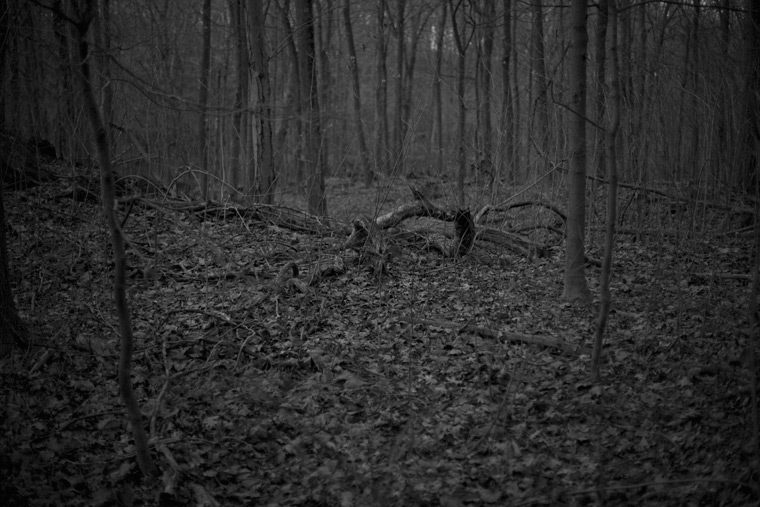 A place called Mystery Point, at dusk on the first day of a new year. Stereo-photo contemplation. 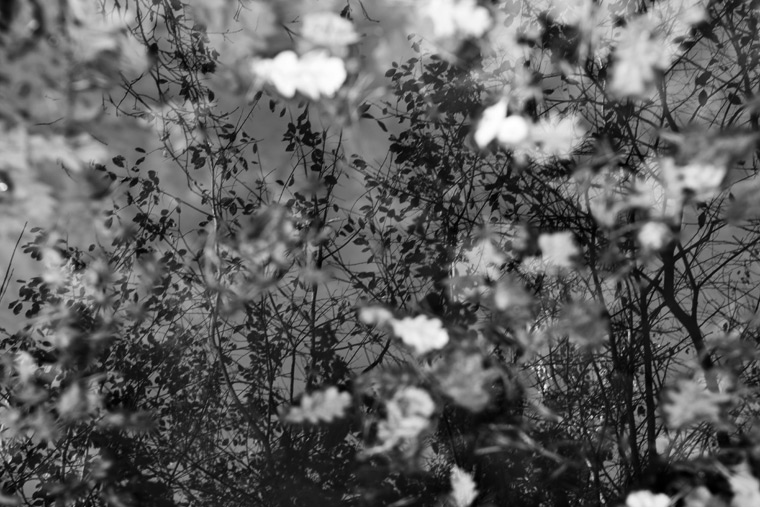 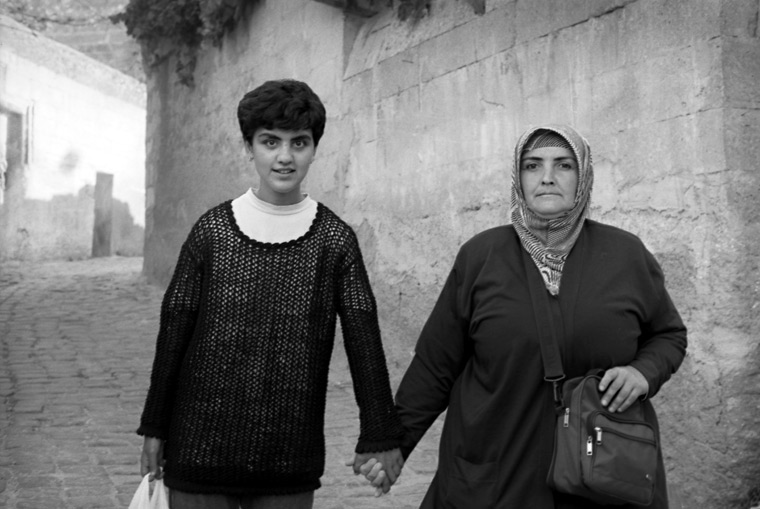 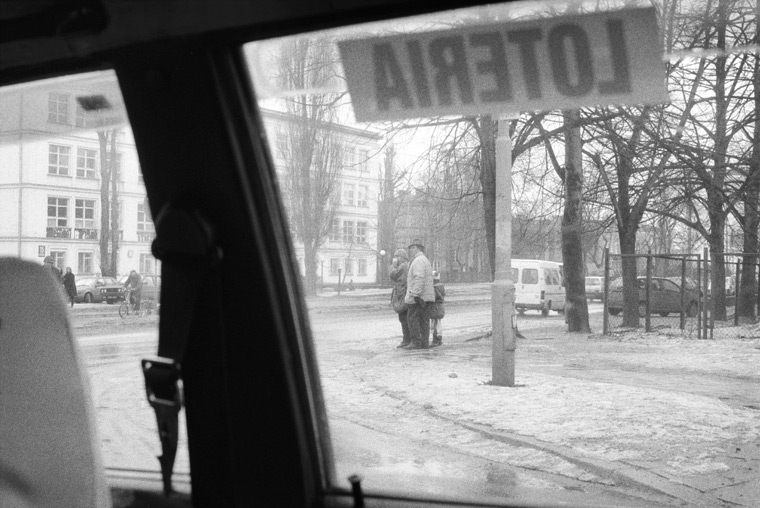 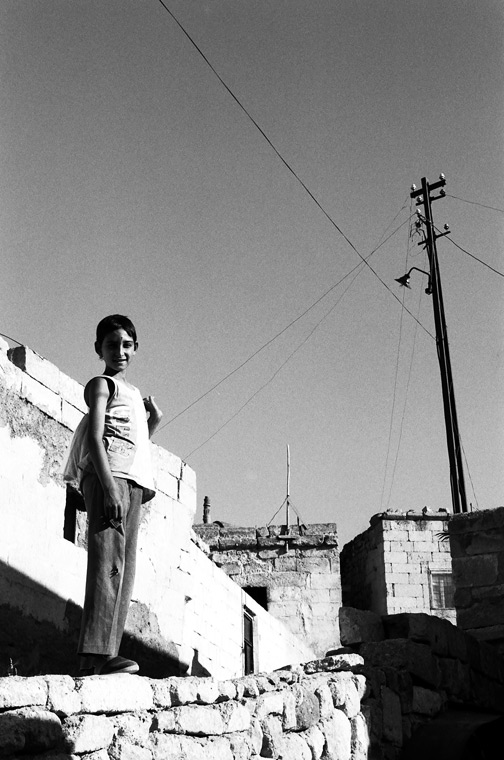 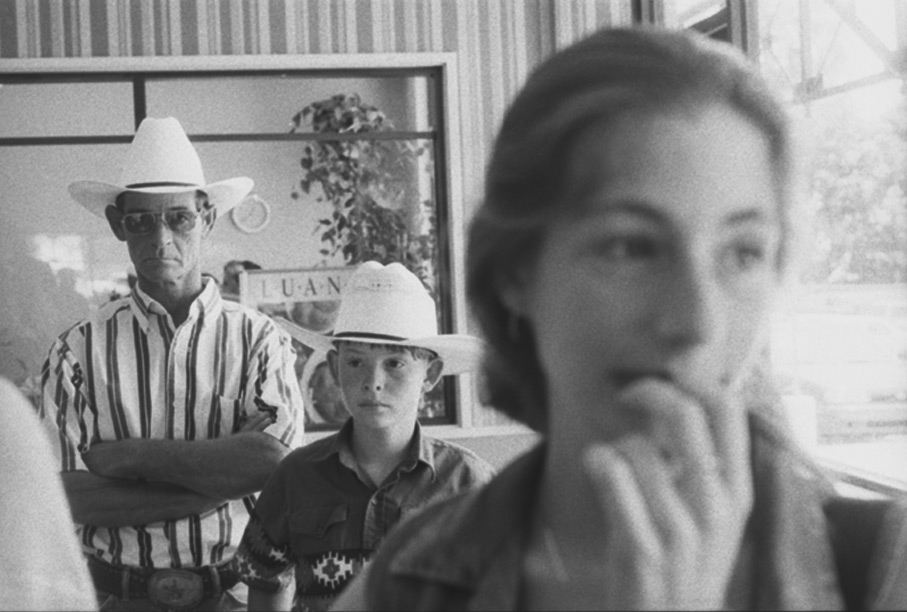 All of a sudden it seemed everyone was posting black & white photographs. I must admit this is was the first time I genuinely enjoyed being part of a chain event. And! I actually did it from start to finish! Ok, so it took me longer than five days – the legendary ‘Monika time’ effect evidently at play. Anyhow.

I was nominated by the extraordinary photographer, Sylvia de Swaan, who’s work I greatly admire (please check out her work by clicking the link on her name). I’m truly grateful for the opportunity Ms. de Swaan sent my way. For one thing it made me revisit work from long time ago and embrace it again. I used to predominantly photograph in black & white using film – yes, those golden years of photography. Remember when Paul Simon changed a line in the lyrics to “Kodachrome” from ‘worse’ to ‘better’, as in: “…everything looks better in black & white?” The crowd went wild hearing the sentiment in that famous concert in the park!

Something I always enjoyed about the b&w process was looking at contact sheets. Often that’s where the back story of an image existed. Or related stories. It was a great tool for understanding why a particular image was chosen over the other possibilities. Sometimes an intriguing rhythm was manifest from frame to frame, even if the next image captured happened at a different time/place. The contact sheet revealed a way of seeing, a sensibility perhaps, sometimes great joy and other times it pointed to what was missing. The contact sheet itself was a photograph and a physical object to be handled, looked at intensely often using the magnifying loop. We had special wax pencils, in white or red, with which we’d circle the frame to be printed. The darkroom days.

Here are the five images I posted for the black & white challenge. In the order they were posted. As photographs in time and place they are mixed. First one is the most recent of the group and digital  – thus originally in color but transformed into black & white. I do believe as a b&w image it is much stronger than it would be in color. The color would limit it’s potential, making it very concise to a particular time of year if you will. But taking away the colors allows it to become a metaphor.

Though I chose the order of images quite randomly, I’m struck by the way they connect. Somehow one informs the other. There are visual motifs that sort of blend into one another. The way the photographs are lined up here, from top to bottom, can suggest one kind of reading, which might differ significantly have they been arranged in a row horizontally.  Visually speaking the pattern of light, leaves and reflection in the first image is echoed in the crocheted top worn by the young girl in the next photo. The clasped hands of the mother and daughter point to the family huddled together on the snowy street waiting to cross the  street. The car’s window divider (what ever that is called) connects with the the power line in the following portrait of a young boy I met in Cappadocia and within that same image the power lines then point the eye to the boy, who then transforms into the other boy in Texas.

What that all means if anything I don’t know. I’m just sharing a quick post here on a Saturday afternoon before heading over to the Museum of Moving Image to watch a Polish film.  But I do believe this kind of analysis of one’s own work is needed and is a good tool to ascertain the artistic progression of one’s practice. Of equal importance is getting feedback from one’s peers. Art is a conversation.

Hope to continue this at another time. Comments are warmly welcomed should anyone feel compelled to do so.

A fellow you may know called Armando mentioned you this evening while we were having coffee and I remembered you from Hunter. The work is very sublime.. quiet and full of the poetry of light. nice to see you are still at it!
Best
Louis 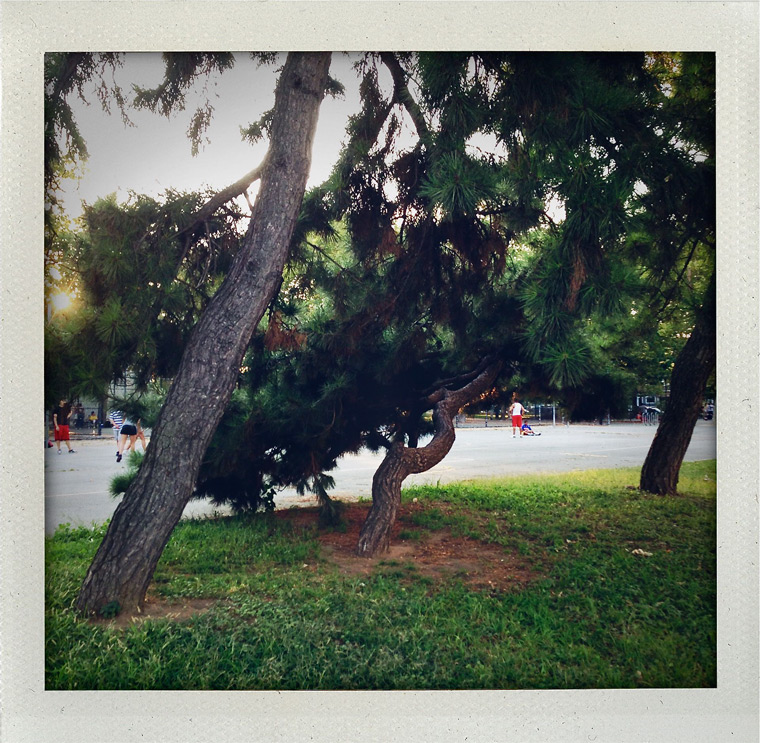 Earlier in the year. Later part of summer, which might have as well been the beginning. Or middle. I’m still astounded how quickly it passed. Tagged on either side by departure.
What does it mean when trees grow sideways?

Here’s a poem by Stephen Dobyns, a poet whose work I discovered by a fortunate accident around the same time pictured above:

Two days of listening to a police radio
and everyone one around me is a killer. I have
walked this far, I must go slower. People
hang onto bodies that won’t be with them
long. Their own and all the others.
Give me your hand. I hold it like liquid
with the same result. My own hand drips
like water from a tree after a short rain.
Green becomes the color of decay. The forest
surronds us.

Standing on the fire tower
in the state park, I see a doe moving
beneath me. All twigs are pointing at it.
The ground can swallow it. If I shout
its sky will crumble. I refuse to breathe.
Nearby, hunters with bows and arrows rehearse
their comic lines: Who will grace our fenders?
Who will hang upside down in our immaculate
front yards? Their arrows have captured
the wind and its music. Their faces are like
drums, or clocks ticking. Their faces drip-
the noise of static on a radio. If I shout,
my own sky will splinter. Silence? I fill
my lungs like a swimmer diving to the bottom.

Splendor of the in-between 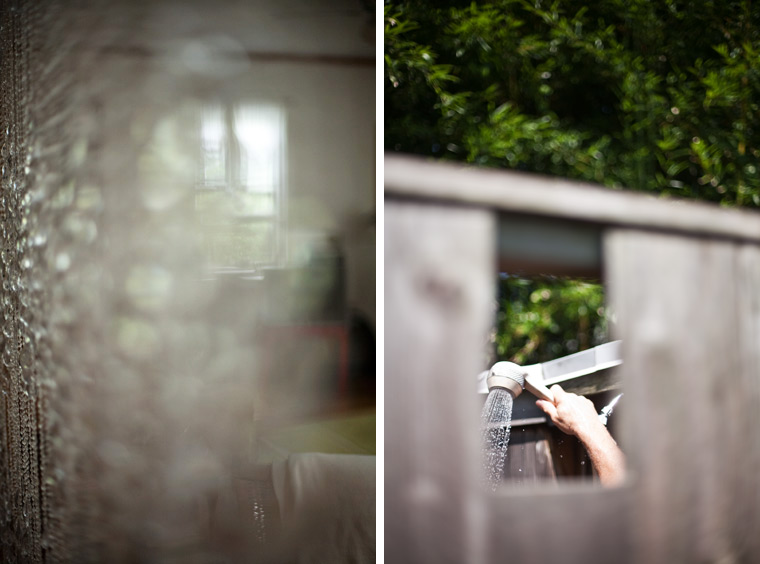 This is my Notebook:

The in-between. My work is about moments that reveal a fragmented narrative.

Summer is fading minute by minute now each evening. When I notice its dwindling twilight I’m surprised at the earlier time each day. It was still bright at this hour just a few weeks ago!
Six more days left of the season.

This morning waking up I felt emptied out. Strangely and with relief.

Been reading more by Annie Dillard. It’s been very helpful. Very:
“There is no shortage of good days. It is good lives that are hard to come by. A life of good days lived in the senses is not enough. The life of sensation is the life of greed; it requires more and more. The life of the spirit requires less and less; time is ample and its passage sweet.” (The Writing Life, published by Harper Perennial)

Here’s to less.
Less needing. Making it matter. Making do. Keeping a schedule.