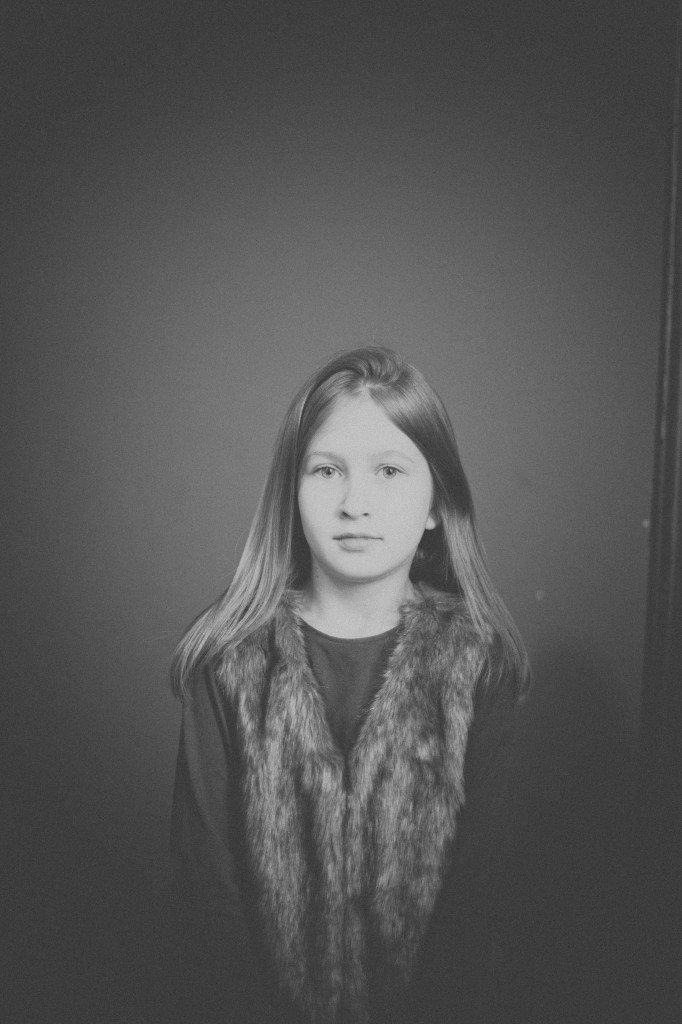 An impromptu moment and place for a portrait. In the entry hallway to a historic  building in Warsaw – the legendary Dom Literatury (The House of Literature). Daylight streamed in by opening the heavy iron door. With light some of the outside chilliness could be felt. Not much to cause shivering, but enough to make Marta’s mother worry her child will catch pneumonia. And of course irregardless of being a precocious youngster, Marta seized an opportunity to defy parental advise. She resisted being told to put back her hat and coat on.
For a moment, perhaps because of the rascal attitude, Marta stepped out of the self imposed photo-shy zone and allowed, though cautiously, to be photographed. Without making faces or hiding on the verge of tears.

As I mentioned yesterday, photographing children can be challenging. Actually, this really is the case with anyone. For a variety of reasons.

Some people are just more open to being photographed than others. This is not to say that some are more photogenic than others. The problem with the concept of what constitutes being photogenic  lies in our unquestioned acceptance of certain cultural ‘norms’. These norms are in some way archetypes, which all of us subscribe to on a mostly subconscious level. Smiling for the camera is an example of momentarily engaging in a ritual whereby we acknowledge that whatever is happening presently suddenly becomes this photo op realm.  Moments are literally captured. We all want to look good in them.

The particular challenge with children is that although they largely don’t yet have a preconceived judgement/worry about how they will appear in a photograph, they are also already used to posing for pictures. Being deliberately cute or clowning around can be equally annoying to many a photographer. Parents too add to the stress by becoming everyone’s worse nightmare of a ‘photo session coach.’ Not to mention that they often have very specific ideas on how their children should behave and look like for the camera.

Maybe that’s where kids first encounter the ‘critic’s voice’ they carry with them into adulthood. There is  a possibility that any of the admonitions we heard as kids, either during those portrait sessions or afterwards being disappointed with the photos themselves, instilled a sense of wary for being photographed.

But then where would we be without all the delightful neurotic impulses we picked up growing up.