Palmer Davis ~ A Storyteller with a lens 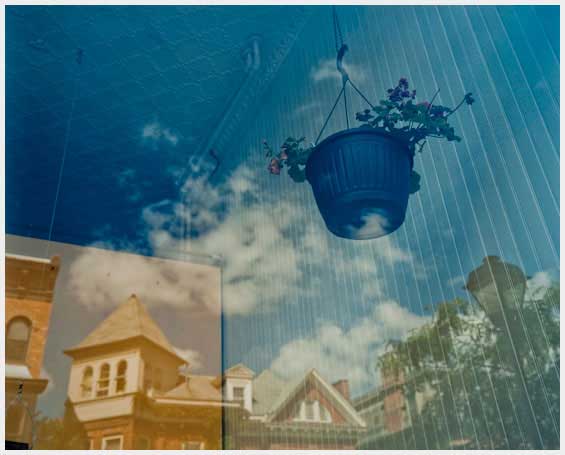 I first met Palmer Davis in November of 2010 when I took his “Stranger than Fiction” class at ICP.  At that time I sensed the need to recharge my creative batteries and be in a group setting again.  My decision to take the class proved to be one of the best things I’ve ever did.  From day one I was both awed and inspired by Palmer’s incredible insight, knowledge and thoughtfulness.  Not only did the class reenergize me but, more importantly, it opened up an entire new approach to photographing.

Palmer exudes an excitement about life in general and photography in particular.  He is a terrific teacher, a wonderful person and a talented photographer.  Since 2011 I had the honor to assist Palmer in four other classes at ICP and have enjoyed these experiences profoundly.

Palmer has shown great interest and faith in my photographic endeavors.    He has also encouraged me to explore my own teaching capabilities.  I consider him my mentor and am truly grateful for all his support.  I recommend wholeheartedly his classes!  Take one – it might just change your life for the better!

There is a magic realism to Palmer’s imagery which has more to do with a sense of wonder then irony.  It’s a sensibility based in an innate appreciation of beauty and a genuine joie de vivre.  Palmer’s photographs contemplate everyday moments by framing what makes these moments come to be in a given instance.  He is a keen visual anthropologist and his images work like landscapes of cultural detritus.  Palmer finds a Zen in it all and as he states his  “pictures evoke a sense of place and time and tell a story.”

It’s being in the right place at the right time, but most importantly being somewhere when the light is just right and enchanting.  Palmer’s work, much like Edward Hopper’s, though based in reality comes across as if a reverie.  His curiosity about the world around him, and I mean the entire world, drives him to explore near and far.  And throughout he notices things and moments that delight him and capture his imagination.  His photographs are like visual chapters of compelling stories about a variety of things, both archetypal and mythical, that form our immediate realities.  The common thread among his many projects is the use of color and the sensual lushness he brings out in almost any given subject matter.  There is also a wonderful sense of play not just of the visual elements but also in the way his imagery beckons us to look for clues in it. Palmer’s imagery at first glance might seem straightforward but in fact it is quite complex and subtly mysterious.

In “Traces” appearances are suspect:  though we are offered a glimpse to an inside of a space (perhaps a storefront?), we cannot get beyond what the glass window reflects back – the gable ends of stately, Victorian brick buildings, an old-fashioned looking lamp post, tree tops and the skies above.  On closer examination some things inside do reveal themselves: the delicately ornate tin ceiling, couple of thin pipes running parallel to it, the wall’s wainscoting paneling  and a hanging planter.  The planter appears plastic and echoes the wall’s vertical motifs; a geranium like plant spreads out its flowery stems.  What are the ‘traces’ referred to in the title?  Since the image is part of the “American Stories” project and the reflection in it suggests an urban atmosphere, albeit one from early XX century, the title seems to conjure up themes from “Our Town” by Thornton Wilder. “Traces” perhaps refers to a way of life that once was or at least our fantasy of it.

“Rooftop View” places the viewer in the figure of a woman in a sari.  Her back is towards us and we assume she’s looking up at a group of young girls sitting or standing next to each other on a rooftop of a strange brick building.  The woman’s figure directs our own gaze upwards and we wonder about her relationship to the group beyond her reach. This is a bewitchingly splendid image. Part of the “In the Mystical Realm of Color,” it is just pure pleasure to look at – the composition, the colors and the subject matter all work together harmoniously.

As the sheer visual beauty sets in, questions about it abound.  Suddenly the photograph is a puzzle.  It suggests illusions and notions of inside/outside dichotomies.  The woman in the foreground is not part of the group on the rooftop.  Whether she desires to be part of it or not remains a mystery and the visual clues don’t seem to imply either way.  In fact should the color and the wonderful light about it get stripped away, the reality it portraits might appear harsh.  The rooftop is part of a larger structure that looks inhospitable with couple of window openings bricked over and the entire façade unfinished and worn.  With this in mind the group of girls now seems contained, cornered almost without the means to freely go outside.  The woman with her back to us also seems to be unable to move forward.  In the back of her there is a pile of bricks strewn about and in front of her lie twisted tree limbs – a subtle metaphor for being stuck between a rock and a hard place. What appears to be a door to a possible courtyard leading  to where the girls are seems almost painted on, a mirage of accessibility.  As Palmer has stated about this project and his travels throughout India “…in this ancient land, it was the intoxicating power of color that marked the way – luring me down a rabbit hole to a magical world of intense beauty and wonder.”

Palmer Davis’ work is like a fine E.M.Forster novel that is hard to put down and looking at his images gives us a room with a view to a dream.   Enjoy! 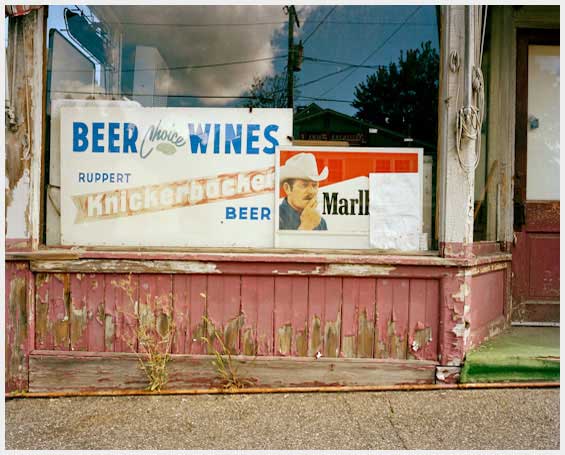 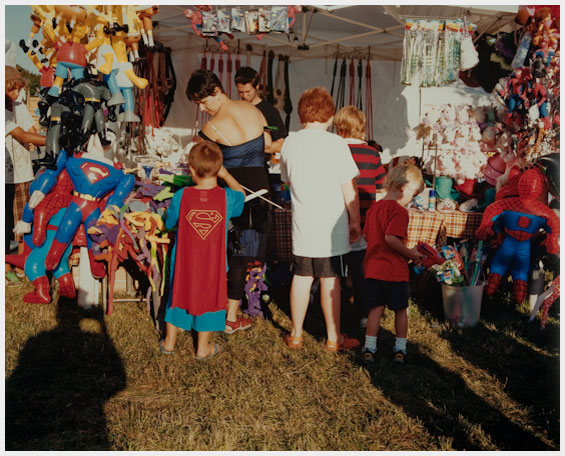 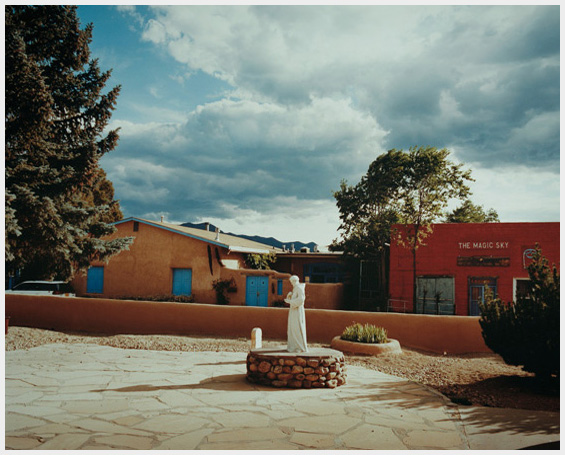 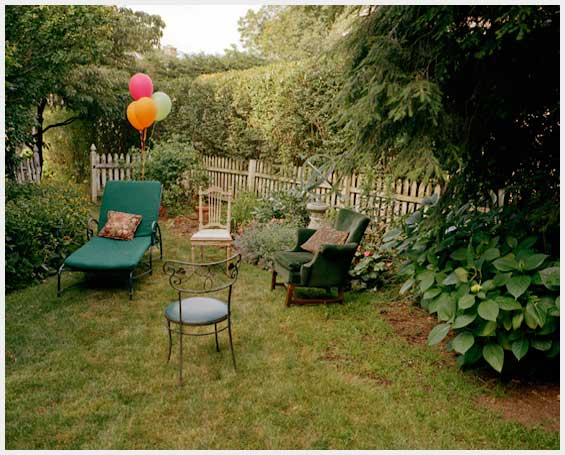 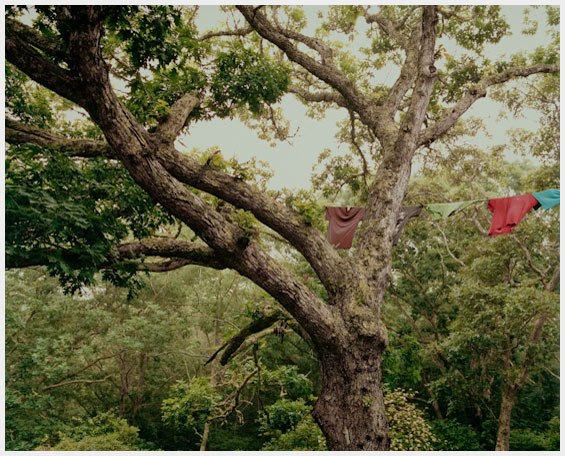 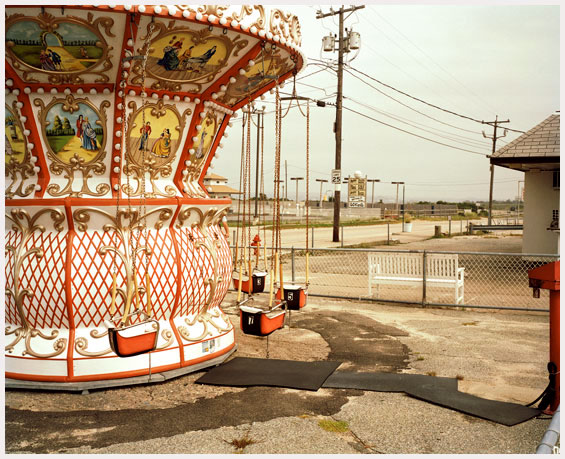 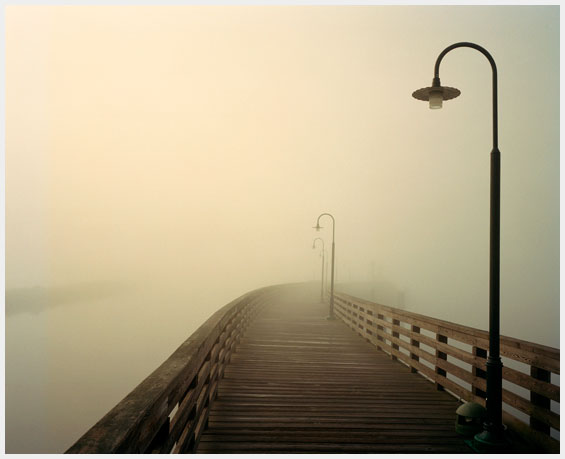 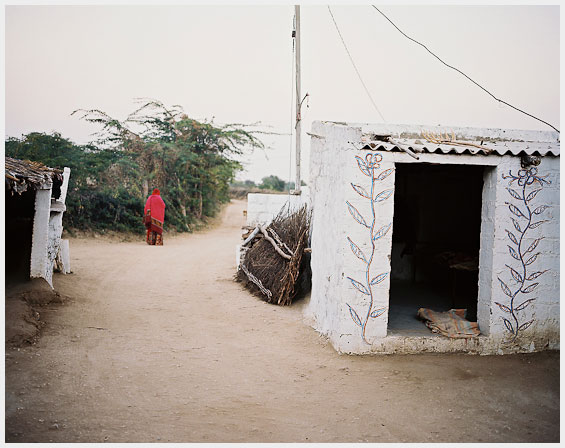 "Red Sari" © Palmer Davis (from "In the Mystical Realm of Color") 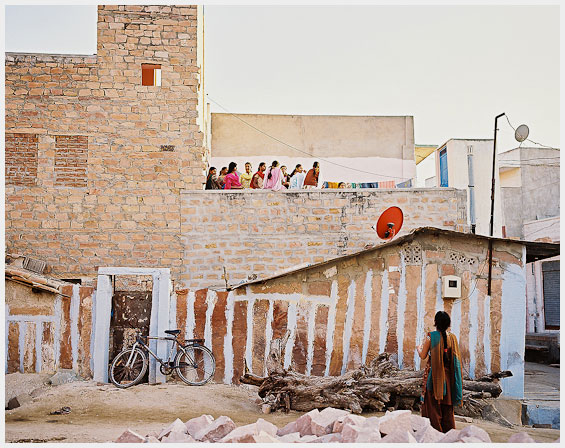 "Rooftop View" © Palmer Davis (from "In the Mystycal Realm of Color")